A visit to Crete www.incrediblecrete.gr would not be complete without experiencing a day at the Herakleion Archaeological Museum. Last summer I had the good luck to be staying at a beautiful hotel right next to the Museum, so immediately after breakfast, I made my way over. I knew I only had a couple of hours available till I'd leave for Ierapetra.

If I could honestly describe, in one word, that penetrating feeling I got while admiring every single artefact in that building, that would be "overwhelmed". No, one word would certainly not be enough to cover it. "Powerful", yes... that's it... powerful. Everything from the actual architecture of the building, the way the exhibitions were placed, the artefacts themselves... seriously breathtaking. One more museum I could easily spend hours upon hours getting lost in the history. As for the inspiration from the Minoan Art, a whole new world of ideas opened up to me and I can hardly wait to get started with the next collection in mind...

The Herakleion Archaeological Museum heraklionmuseum.gr is one of the largest and most important museums in Greece, and among the most important museums in Europe. The Heraklion Archaeological Museum was founded in 1908 to house the first collections of Cretan antiquities, which were rapidly enhanced. Its cultural riches cover seven millennia, from the Neolithic period (7000 BC) to Roman times (3rd cent. AD).

Located in the town center, it was designed by the architect Patroklos Karantinos and was built between 1935 and 1958 on a site previously occupied by the Venetian monastery of Saint-Francis which was destroyed by earthquake in 1856. The ruins of the monastery are visible in the museum’s garden.

Following the restoration work of the past few years, completed in May 2014, the exhibition is housed in 27 rooms.

The collections are now displayed according to modern museological practices and design, in chronological and thematic units accompanied by audiovisual material and introductory texts. 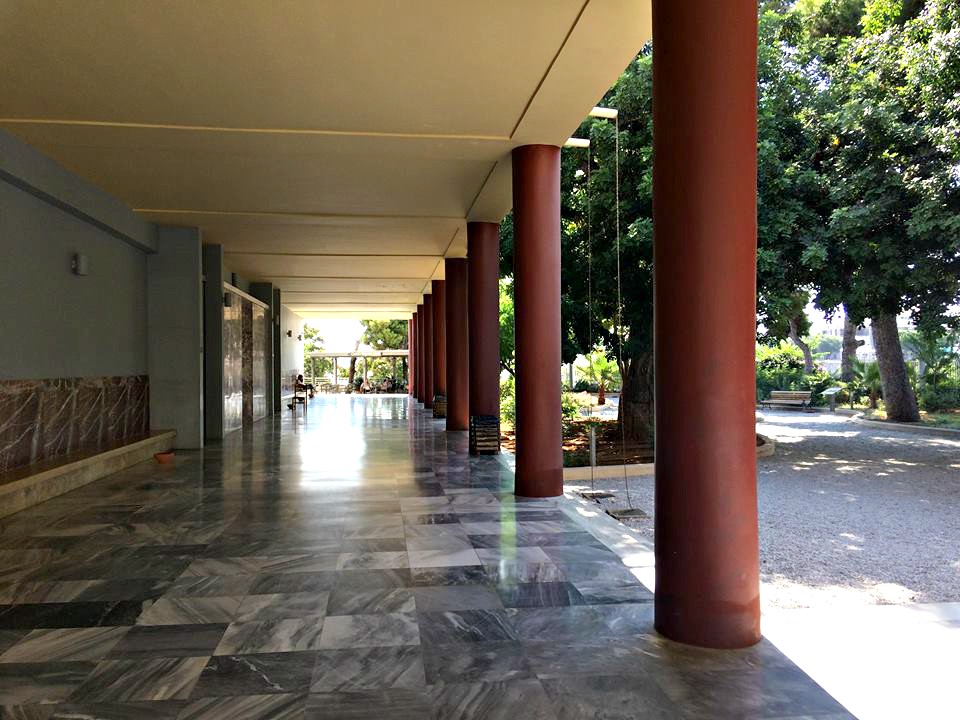 The Museum building is an important example of the Greek Modernist style of architecture. The colours and building materials used, along with the multicoloured veined marble, are reminiscent of the painted imitation marble revetments of the Minoan palaces. The two-storey building includes extensive exhibition rooms, an audiovisual media room and laboratories. The Museum also has a vestibule, a gift shop leased from the Archaeological Receipts Fund, and a cafeteria in the garden.

The Heraklion Archaeological Museum is a Special Regional Service of the Ministry of Culture. Along with the permanent exhibition, the museum organizes temporary exhibitions in Greece and abroad, creates and implements educational programs, collaborates with scientific and scholarly institutions, and houses a variety of cultural events. 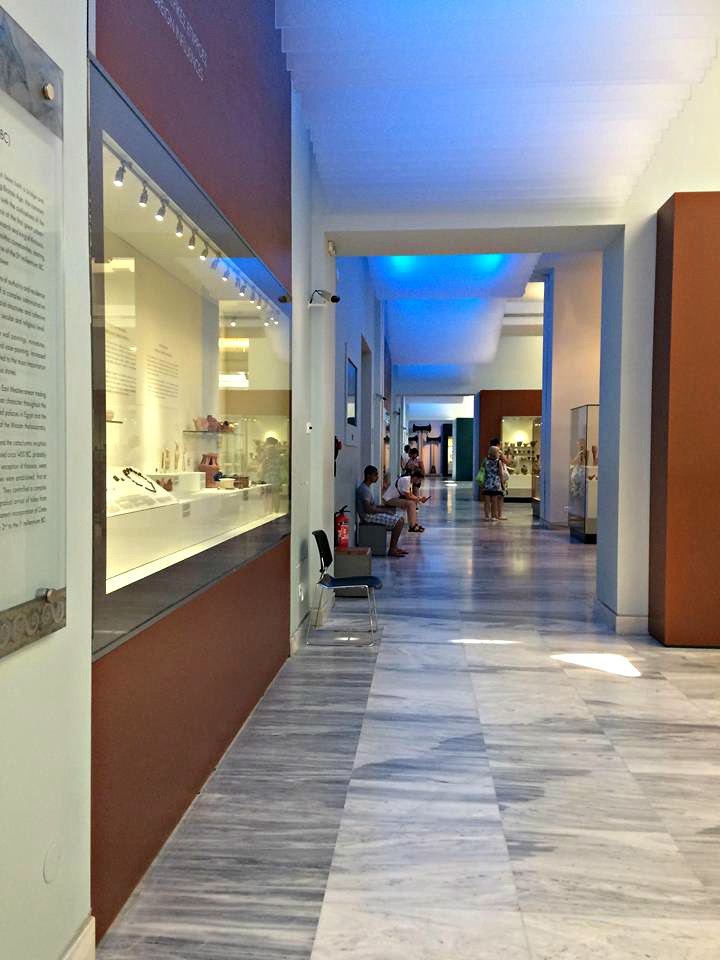 In the 12 rooms on the ground floor, the exhibits of the glorious Minoan civilisation, the first urban-palatial culture on European soil, are presented in thematic units highlighting the formation of the first communities, the rise of the ruling classes and the consolidation of palatial power and hierarchy, as well as the Minoan scripts which formed the basis of the administrative system.

The outward-looking spirit of the Cretan centres and the construction of seagoing ships favoured participation in exchange networks, importing goods and transferring ideas from the late 3rd millennium BC onwards, and securing Crete a dominant position in the Aegean and the East Mediterranean during the 16th and early 15th cent. BC.

The rule of the seafaring Minoans in the Aegean, linked to the ancient legends of the demigod King Minos, lord of the labyrinthine Palace of Knossos, is the main focus of the exhibition. Finds associated with religious rituals, sports, public festivals, aspects of private life and burial customs are showcased in dedicated rooms. 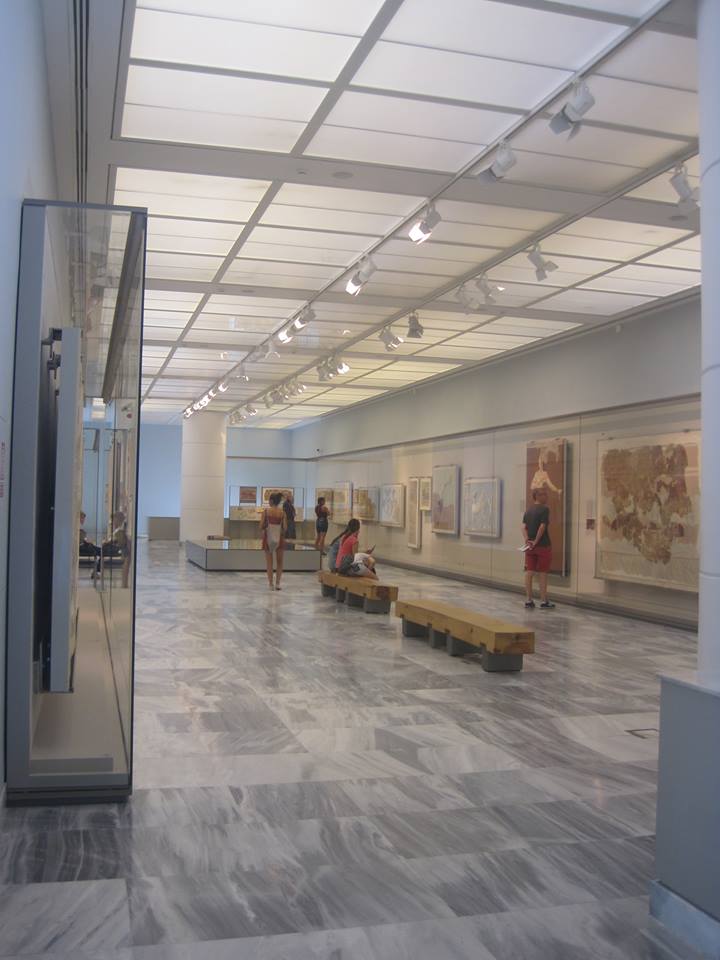 The celebrated Minoan art is featured through thousands of objects. Among the most spectacular are the famous faience Snake Goddesses, the stone bull's-head rhyton, the Prince of the Lilies and Bull-Leaping Frescoes, the gold Bee Pendant, the Hagia Triada Sarcophagus, the polychrome Kamares Ware vases, the Linear B tablets from Knossos and the enigmatic Phaistos Disc.

This most famous example of Minoan pictographic script, unique in its kind, was discovered inside a small room of the Phaistos palace. It dates to the early Neopalatial period and is preserved intact. Both sides of the disc have signs impressed in a single spiraling line beginning at the edge and ending in the centre. The inscription uses forty-five different signs, which are repeated and grouped together to form words separated by vertical incisions. The signs were impressed on the unbaked clay using seals and for this reason the disc is considered as the earliest known example of typography. Until now several different interpretations of the text have been suggested, none of which is entirely convincing. Modern scholars believe it to be a religious text or hymn. It is noteworthy that several signs of this inscription appear on an axe from Arkalochori. 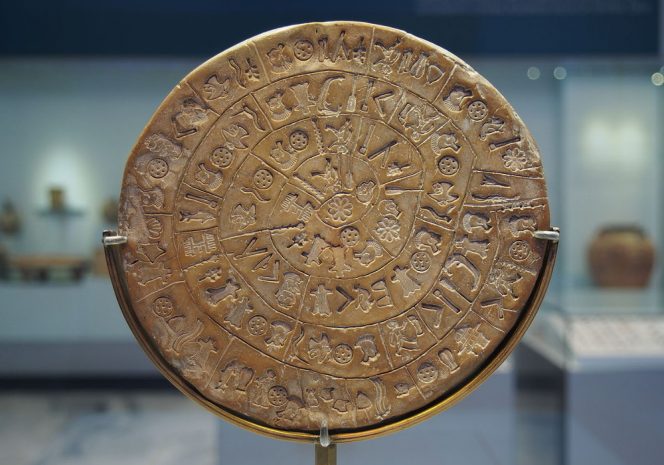 Stone bull’s head rhyton, left side of head and horns restored. It’s a masterpiece of Minoan art, worked with great precision to render the natural features of the real animal. The snout is outlined with an inlay of white seashell, while the preserved right eye is inlaid with rock crystal, with rim and iris of red jasper. This vessel would have been used for libations, as indicated by the hole in the neck for filling and the corresponding hole in the snout for pouring out the liquid. 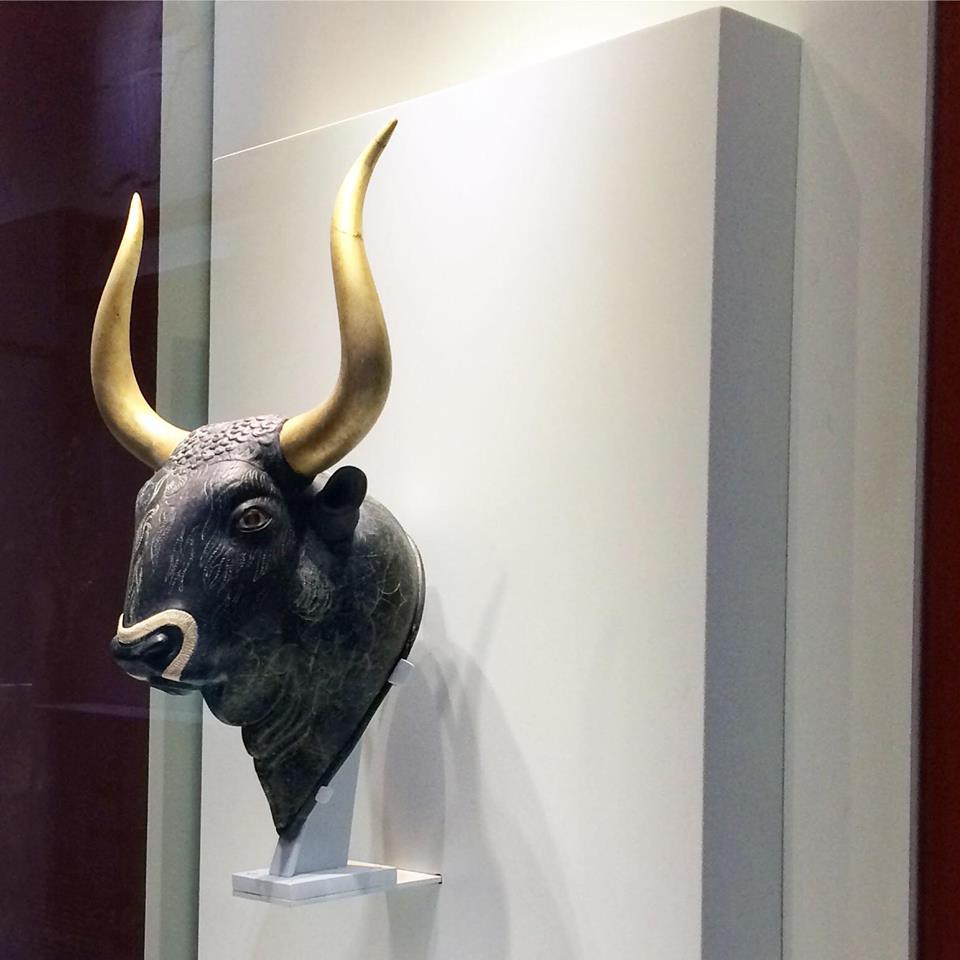 THE “LADIES IN BLUE” FRESCO

Part of a composition of richly dressed and lavishly bejeweled female figures depicted against a blue ground. Despite its fragmentary condition, the wall painting transmits the sense of opulence and prosperity of the royal court while reflecting the coquetry of the ladies, who gesture displaying the richness of their jewelry. 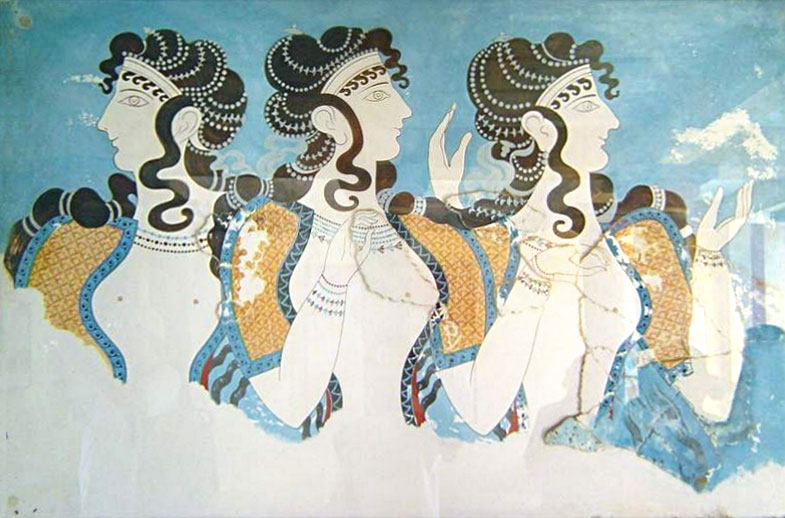 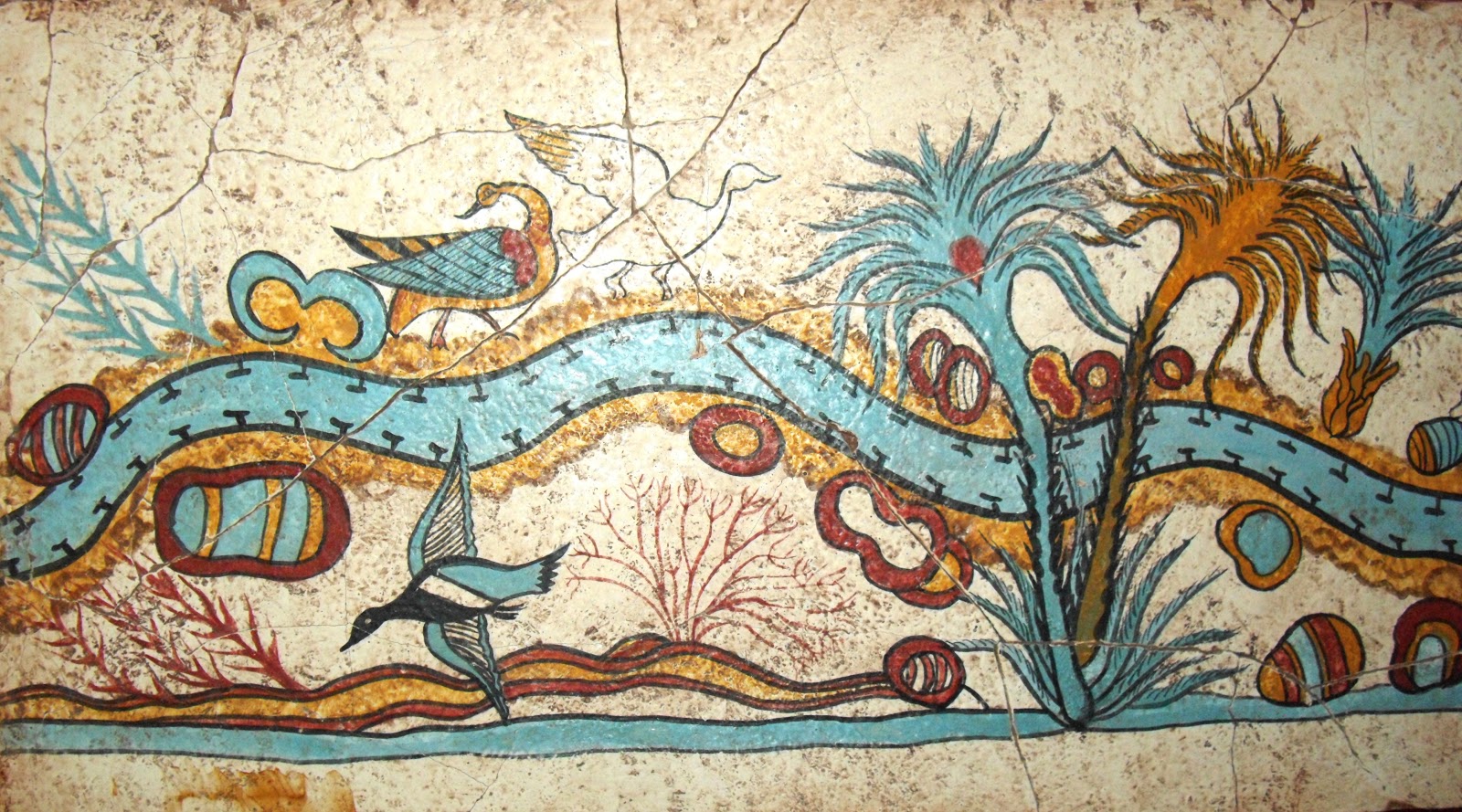 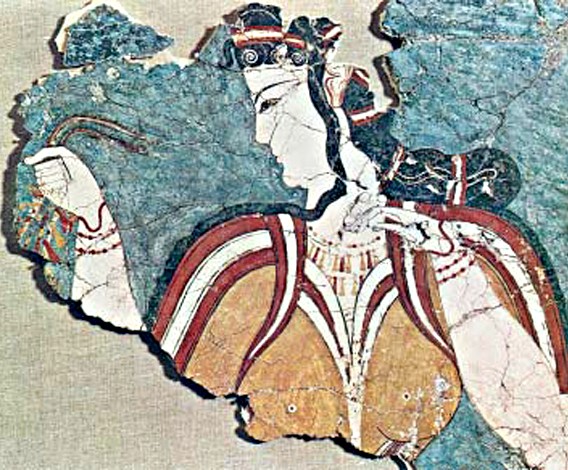 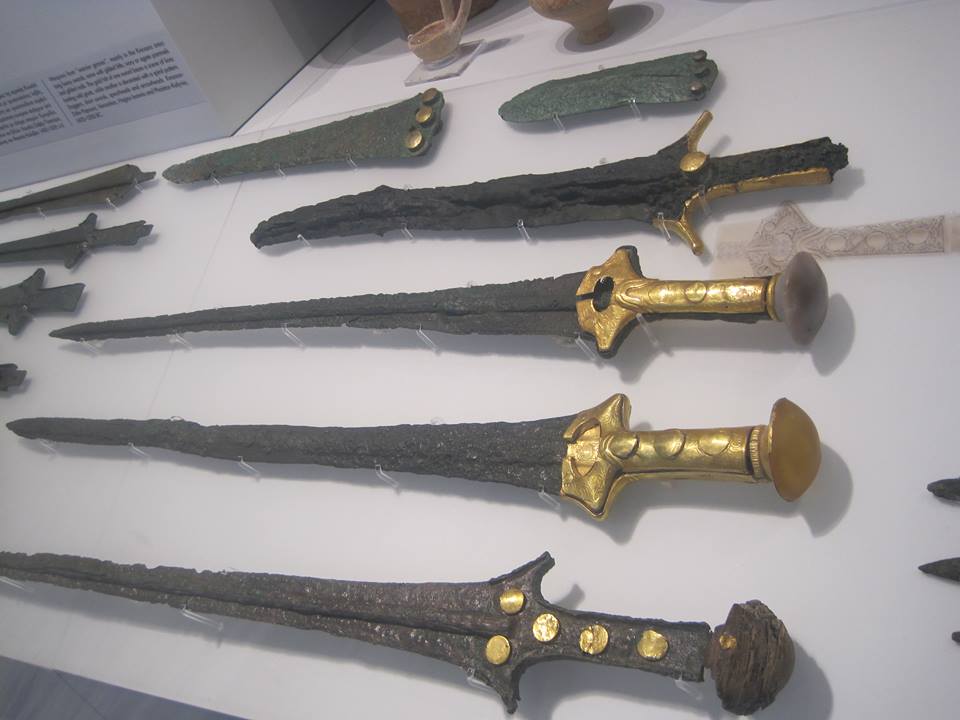 THE “PRINCE OF THE LILIES”

The “Prince of the Lilies”, an emblematic image of Minoan Crete, was part of a large mural composition in high relief. The figure, composed of three non-joining parts, is portrayed life-size, wearing a richly colored kilt with a codpiece and belt and a majestic crown on his head with papyrus-lilies and peacock feathers. According to the excavator of Knossos, Arthur Evans, he was the “Ruler of Knossos” the “Priest-King”, a personification of religious and secular authority. However, other scholars suggest different reconstructions and interpretations, according to which the “Prince” may be an athlete, a boxer, or a commanding ruler, while the crown is attributed to a priestess or a sphinx. 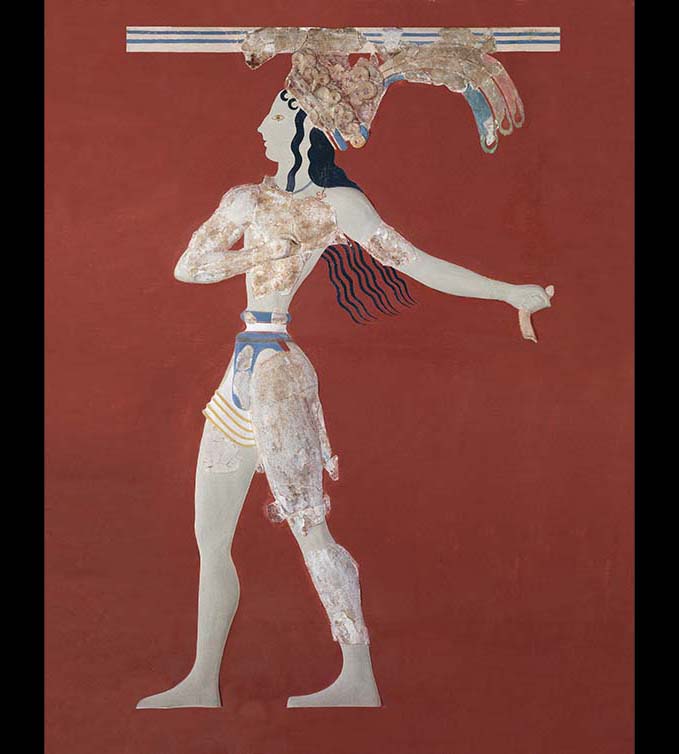 A bull-leaping scene, vividly depicting how the spectacular sport was performed. There are three participants, two white-skinned women and a brown-skinned man. One of the female athletes is restraining the bull by the horns to reduce its speed so that the leaper, performing the dangerous backwards somersault, will not be gored. The second female athlete, behind the bull, is waiting with outstretched arms to catch the leaper as he lands. The fresco was found on the east side of the palace of Knossos, together with fragments of others depicting different stages of the same sport. 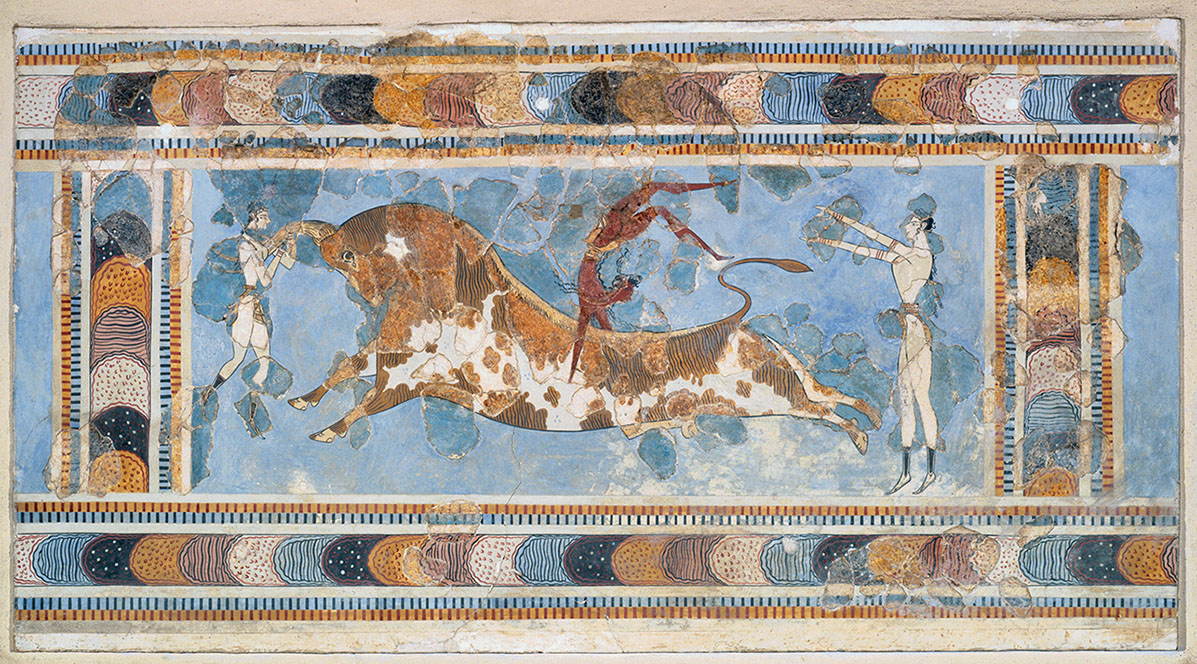 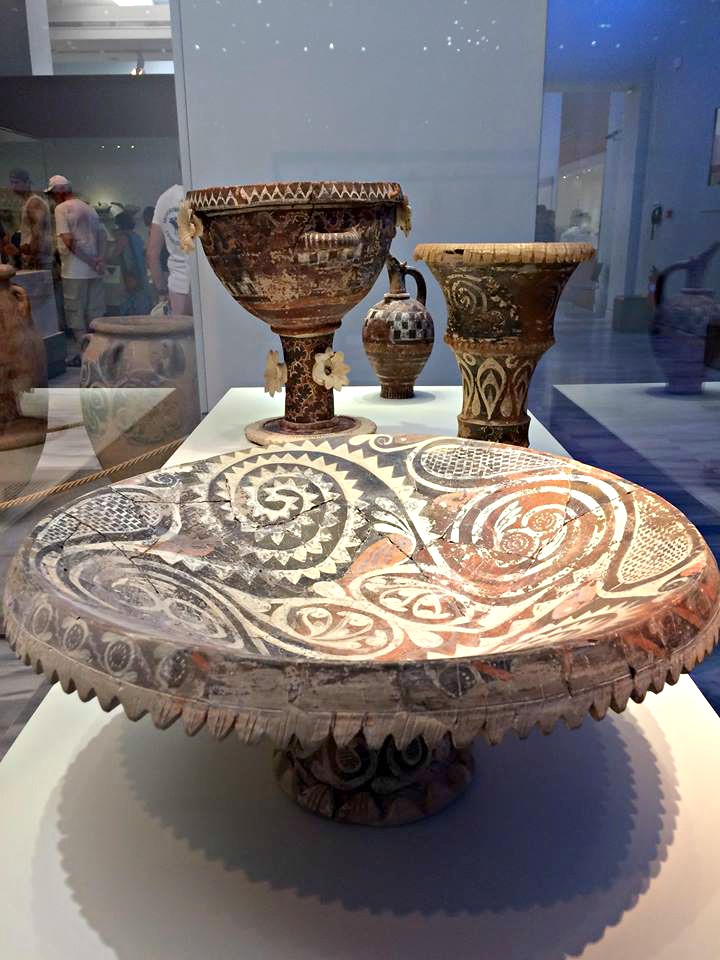 Finds from settlements, sanctuaries and cemeteries of the post-palatial period. The "Kamares Ware" exhibit (Gallery III)
More Official information about the Exhibitions of the Herakleion Archaeological Museum.
http://odysseus.culture.gr/h/1/eh152.jsp?obj_id=3327
Municipality of Herakleion http://https://www.heraklion.gr/en/

Oops, you forgot something.

The words you entered did not match the given text. Please try again.

Oops! This site has expired.

If you are the site owner, please renew your premium subscription or contact support.